The electric-blue-haired goddess smiled yellow sunbeams down,
Down on wherever she looked: on
The ruddy-bearded men in cloth hats,
Tirelessly working; on
The fair and dark children in summer dresses and overalls,
Fearlessly laughing; on
The mothers and fathers leaning on tree trunks,
Whispering, knowing; on
The young lovers tripping through the forest paths,
Breathless, gay; on
The grey-headed elders with their canes and candies,
Humming, waiting.
All these, she smiled on, giving blessing to thought and comfort to pain,
Granting wishes and hoping for change,
Singing silently and praying earnestly.
All these she smiled to, she lifted up beyond the heavens,
Where human minds only hope to wander.
All these she lifted up in joy and harmony,
Electric-blue hair, and love.
by Kevin F. Story posted at 21:38 No comments:

Counting the stars from my Los Angeles balcony—
Nine, I think, tonight;
Just enough for one constellation or
Two, if you're creative.
There are one or two stars
Only seen if you
Remember where they might be.

There is the off-chance you're hallucinating.

Tonight's constellation is Poodle,
After the canine god of Beverly Hills—
Ferociously pouffy.

Remember planets shouldn't twinkle.
Horizon is misleading—
There are towers upon the unseen mountains.
A tribe in Costa Rica saw a postcard from New York and said
They lined up all the stars in
Neat little rows:
Their understanding of cities.

Remember the moving lights are airplanes.

From where I am those stars of Poodle
Point south toward those hollow hills
Where fame and fortune fashion
Empty lives.
After all,
The poodle without fur is just another dog.

Remember stargazing as a youngster—
Backs upon the dewy lawn;
Cool summer nights,
Carefree and wistful,
In the woods away from cities,
Far from pollution—a purer place;
Imagining why ancients thought that
Dippers looked like bears;
Hoping that the bears would know to stay away,
Excited that they might not;
Hoping that a girl you liked would
Like to stargaze too.

Remember that you're hoping still.

An empty person is just waiting to be filled.

Geraldine Taylor told Rex Carrington to fuck off, and he did. He fucked right off the planet. As he fucked off, he held a sign in the porthole that said “G.T.—THAT DRESS DID MAKE YOU LOOK FAT,” which the news cameras were unfortunate not to have gotten. The rocket ship Rex fucked off in was state-of-the-art, as they say, though the making of rocket ships is more of a science than an art. The press told him to say something cliché before he left, so his last radio communication was “So long, fuckers,” though they heard the thing they wanted to instead.

As Rex left the fiery atmosphere of the planet, he felt truly free for the first time in his life. He was almost grateful to Geraldine for telling him to fuck off. It had taken years for him to finally fuck off in this manner. First he simply left the apartment, but he felt it wasn't enough. He went to other cities, other countries; still, it wasn't enough. One night, having fucked off to a bar, an ad on the t.v. caught his eye. “Always wanted to really get away from it all?” Rex had. “Ever thought about travelling to space?” Rex hadn't. But it intrigued him.

For some reason, Rex was just what they were looking for. He studied long and hard everything he would need to know to operate a rocket ship, even though they told him he wouldn't need to do much of anything. Rex had decided he would play along, but when the moment came, he would cut communications and hijack the craft. They would never see it coming.

He laughed as he floated around the ship, free to do whatever pleased him. He was free from laws and rules, free from anything that would hold him down, and certainly free from Geraldine.

Settling in at the controls, he gave himself commands: “Straight on to Venus. Full speed. Steady as she goes.” The green-blue orb floated away.

Then he waited. Hours ticked by. This is what fucking off feels like, he told himself.

He slept and had an awful dream that he would see Geraldine on Venus. Not just Geraldine, but a whole planetful of Geraldines. He awoke feeling achey and decided to change course to Mercury instead. He dreamt about cars and ice cream trucks after that.

After some time, a fellow named George joined Rex in the ship. George seemed well aware of his being a hallucination, but that didn't bother Rex all too much. George was apologetic about it. Rex just liked the company. Then one day George was replaced by his much more attractive sister, Maggie, who disappeared every time Rex went to touch her. It was during one of these futile exercises that a bell went off, like a school bell. He looked out the window and was surprised to see a very familiar orb mightily looking back at him.

He had made a miscalculation. He pulled at the controls, but the rocket ship was powerless against gravity, one of those laws from which Rex hadn't actually been able to free himself. He hadn't fucked off after all.

Uh oh, he thought as he ventured towards the heat death of the sun. I fucked up.
by Kevin F. Story posted at 21:41 No comments:

Synonyms are an interesting thing in that two words which are the same are really not.
“Quiet” lacks the static of “silence”,
As “unnerved” lacks the crinkle of “disquieted”.
“Laugh” is quite pedestrian beside “chuckle”, “titter”, “giggle”, “guffaw”, and “roar”;
Though “roar” can also be like “yell” or “bellow” or “shout”.
“Rain” can be a “downpour” or a “drizzle”,
And “sleep” can be “repose” or simply “rest”.
Though alike, they carry different weights and measures,
Different characters and tones.
There is “green”, but each shade has its own purpose on the painter's palette,
As each word has on the speaker's;
“Chartreuse” and “forest” and “olive” each color the world in its own way,
Just as the humans who created them.
All alike, yet unique.
by Kevin F. Story posted at 21:29 No comments:

Email ThisBlogThis!Share to TwitterShare to FacebookShare to Pinterest
Topics: poetry 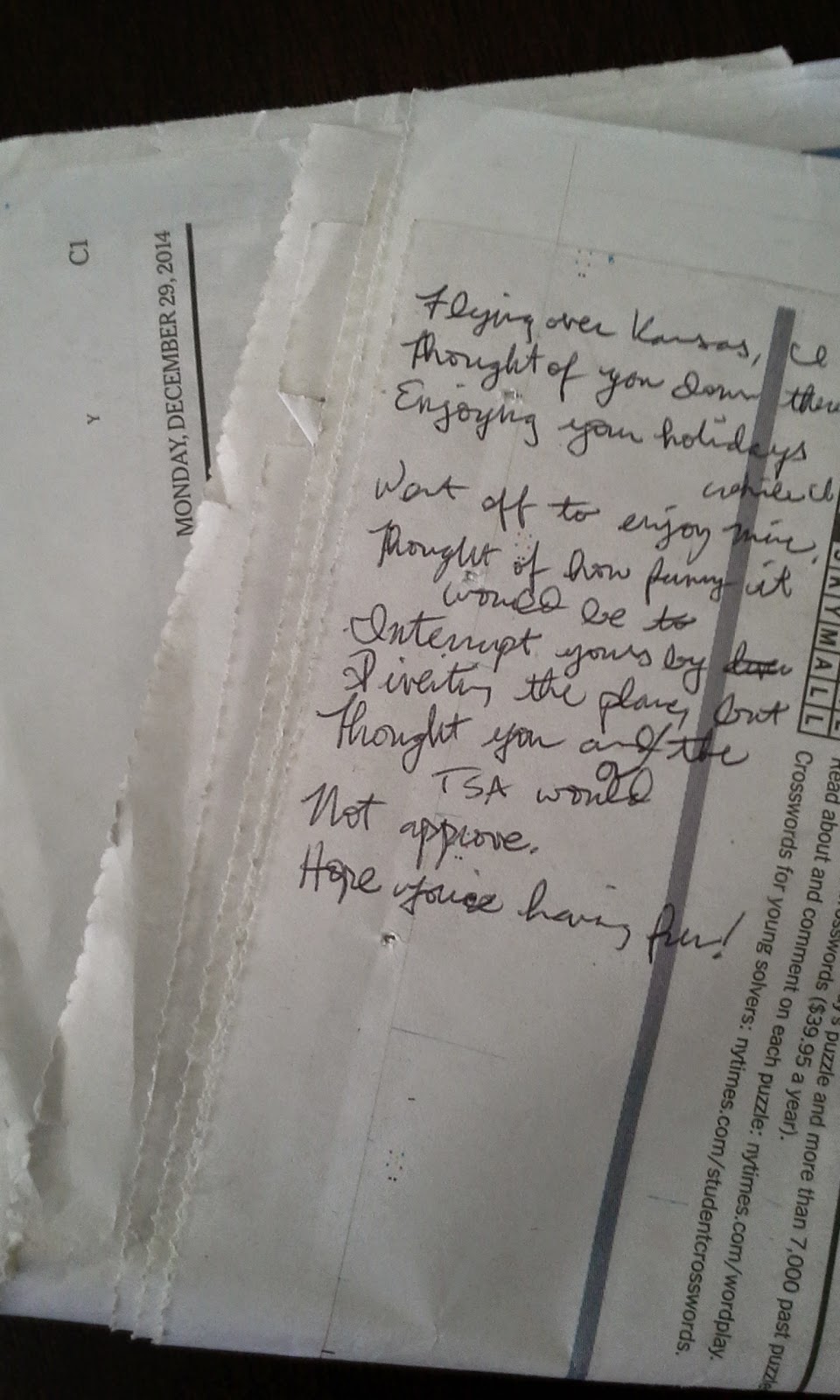 Flying over Kansas, I
Thought of you down there
Enjoying your holidays while I
Went off to enjoy mine. I
Thought of how funny it would be to
Interrupt yours by
Diverting the plane, but
Thought you and/or the TSA would
Not approve.
Hope you're having fun!
by Kevin F. Story posted at 20:20 No comments: